Over 10 years we help companies reach their financial and branding goals. Maxbizz is a values-driven consulting agency dedicated.

Why is Alignment so Important in Today’s Digital World?

Sometimes hearing stories of other’s struggles causes us to reflect, think, and learn something new. So, I thought I would tell you a true story about two business executives who were not at all aligned…

An old colleague of mine, Bill, a CMO, called the other day to discuss a terrible struggle he was facing in his current company. Bill joined a fast growing SAAS software company over a year ago. The company experienced exponential growth over the previous five years but had begun to slow down. Two major competitors had released innovative global solutions. These competitors were now taking market share in both large enterprise deals and smaller deals. Bill’s company knew this possibility was coming and they were close to releasing their own completely renovated product that would certainly match competition. However, the testing was taking longer than anticipated, creating tension between sales and development.

Bill’s problem was that he could not get the VP of Sales, Mark, working with him on launching the new product. As you can imagine, Mark had his own problems. He was scrambling to find more leads and sales tactics that could help his team beat these competitors and make their numbers. When Bill and Mark discussed priorities, Mark had no time or energy for a launch 6 months away. He was even skeptical of the efforts that marketing was attempting to institute and develop new leads.

Bill relayed to me that he had engaged an experienced sales consulting company to evaluate their lead generation activities in the marketing and sales process. As it turns out, most of the 31 gaps in the report were more related to sales than marketing. So, Bill arranged a meeting for the consulting company to share their findings with everyone on the sales and marketing teams. The consulting company even recommended specific action steps – and how to implement them – to the Sales VP that would close the gaps.

Mark and his team had politely listened during the presentation, but much to Bill’s dismay, four weeks passed with no action… Bill became increasingly frustrated; He thought everything was clear and obvious. He thought that after hearing all of the things they were doing wrong, Sales would rush to make corrections, as they all wanted to make money and these outside consultants were experts.

Now, most likely all of you have ideas on what went wrong. Take a moment to imagine if two of your top executives, whose departments had to work closely together, were severely misaligned. Imagine the rancor, the unwillingness to work together, and the passive resistance to improve or change based on each department’s recommendations…. And, of course, these struggles cascade within the departments. So now picture the personal squabbles and inter-departmental water cooler discussions taking place about how ineffective and stupid the other guys are.

Was this sapping time away from prospects, customers, and productivity? Perhaps the worst part of this situation is that the struggle was hidden from the CEO. She assumed that these two Senior Executives were pulling in the same direction to solve the company’s revenue problem. Imagine the negative impacts that occurred in this company when the CEO finally became the last to know the issue. As an operating executive, this would never have happened on my watch. Yeah right.

Now imagine if Bill and Mark had been clearly aligned. Imagine if they had a way to communicate more clearly and fully dialogue about the conflict. What if they both really understood each other, conflicting priorities, and goals, yet found a way to balance this and accomplish both. Imagine the different level of passion and output from their teams and the positive impact this would have on business results. This would be a much better ending – or, New Beginning – to the story.

I write this because I believe it is becoming easier and easier to miscommunicate in this fast paced digital world. Everyone is moving quickly, responding to a bombardment of inputs, and shifting priorities. Our research and observations show that this is not only a bad thing, but it is happening more frequently. Although misalignment around sales and marketing executives is sometimes easier to spot, we observe this in many types of companies at all levels. Sister organizations have to work together to deliver superior product, revenue, and customer service, and miscommunication and misalignment usually results in missed deadlines, decreased productivity, lost revenue, and poor customer satisfaction.

I hope this story will cause you to reflect somewhat on your organization, and the pace of change, productivity, and investment in leaders and communication. As we all move to transform our businesses to take advantage of digital technology, we have to be mindful of the people that make up our business, and communicate in a way that creates alignment and inspiration.

Is Trust Still Important and Does Upholding Commitments Matter in This Fast-Paced Digital World?

7 Leadership Traits for the 21st Century 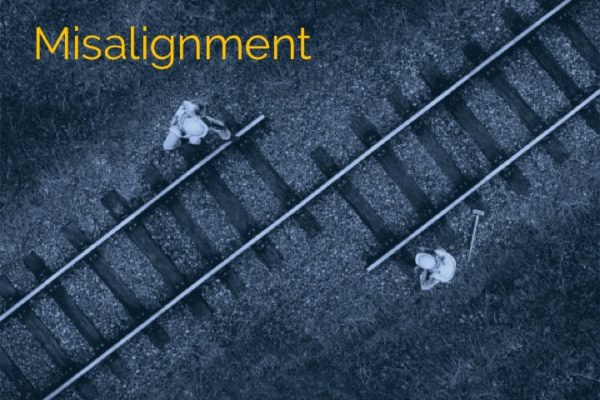 Miscommunication and Misalignment are Rampant Today! What Role are you Playing?

Training As A Campaign